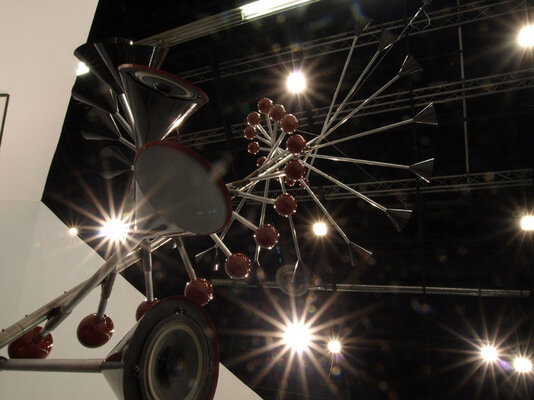 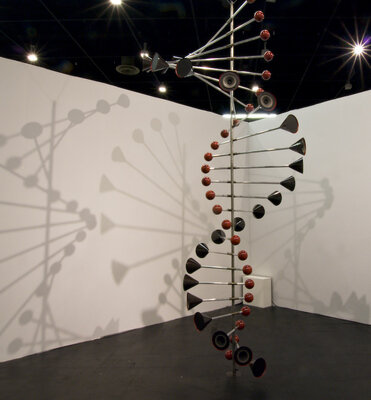 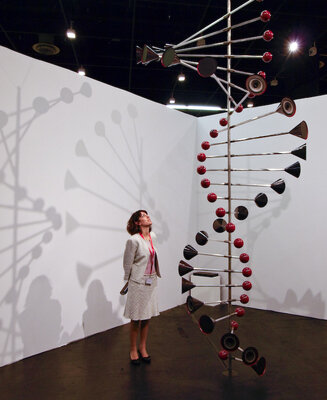 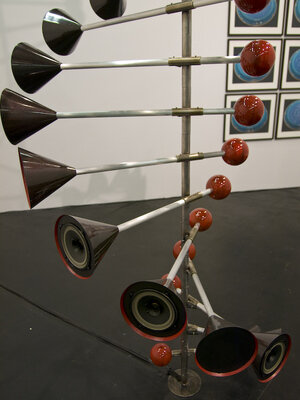 The Babel series explores language and word sounds, through deconstructed translations of poems, using multiple voices, languages and accents. These are an optimistic retelling of the story of the tower of Babel, in which the multiplication of languages, instead of dispersing civilization, is a source of serene beauty: the poetry of variation. For Language Angel, the spiral staircase of Babel, usually portrayed as diminishing towardthe top, is inverted, proposing an infinite solution: a tower that does not merely reach toward heaven, but eventually contains it. The tornadic helix is then doubled, suggesting a strand of DNA. A translation of Paul Celan’s poem Leb die Leben, read by 50 arbitrarily selected people, in different locations, with different accents, forms the basis of the sound score. The readings are sliced word by word and distributed in a cloud of murmuring and sibilance, a genetic tornado describing the dawn of new languages and the old ones in decay. These drive progressive feedback loops, turning the poem inward on itself, and then exploding it into its parts, in clouds of scattered words. The sound is the memory of the poem, relieved of linear time, understood as a collective, instantaneous event. Perhaps the story is thus: we are at the moment of fragmentation, the big bang of language; the accents form and re-form to produce the beginnings of dialects, which will eventually become new languages: the cycle of contraction and cataclysmic expansion of language.

Live the lives, live them all
keep the dreams separate,
see, I rise, see, I fall
am an other, am no other

Thanks to David Henderson for inspiration