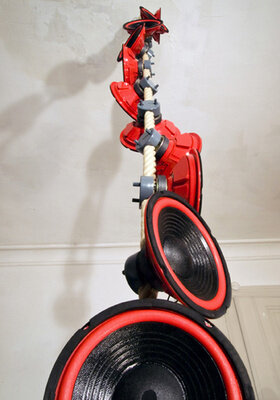 The March of Progress, The Ascent of Man, “...onward and upward...”: See, we rise contemplates the nature of mankind’s advancement, ever forward upon the steps (or the ashes) of the past. Progress, endlessly desirable, somewhat pornographic in its appeal, and in practice often destructive, is the subject. The title is taken from a late Paul Celan poem, Leb die Leben, an unusually optimistic work, and here Henderson struggles with the Hegelian dream of the future.

The episodic sound composition is built from 92 recordings of footsteps ascending three different staircases. They march ever upward around the spiraling speakers, and using convolution (a sonic “morphing” technique), they are combined with fragments from previous electroacoustic works, the oldest on the lower steps, and rising chronologically; accumulating a personal history. The rising sound extends the physical sculpture outward in loops and spirals, in pulsating colors that recast the surroundings and the armature itself in changing hues and forms.